During this time of pandemic, Memorial Hall Library is pleased to announce Andover Reads 2021, Susan Orlean's The Library Book, published in 2018 and released in paperback in 2019. The book explores the role of public libraries and so much more.

Memorial Hall librarians have created Shelf Help, a new podcast. The Library Book is their first subject. Click here to listen, or search for it in Apple Podcasts.

Susan Orlean re-opens the unsolved mystery of the most catastrophic library fire in American history, and delivers a dazzling homage to a beloved institution – our libraries. On the morning of April 29, 1986, a fire alarm sounded in the Los Angeles Public Library. Raging through the stacks, the fire reached 2000 degrees and burned for more than seven hours. It was the largest library fire in the history of the United States: it destroyed four hundred thousand books and damaged seven hundred thousand more, and shut the library down for seven years. The mystery remains: did someone purposefully set fire to the library—and if so, who? 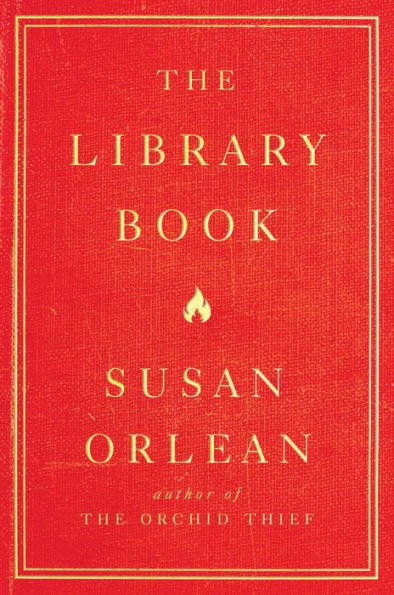 Weaving her life-long love of books and reading with the fascinating history of libraries and the sometimes-eccentric characters who run them, award-winning journalist and New York Times bestselling author Orlean presents a mesmerizing and uniquely compelling story. With her signature wit, insight, compassion and talent for deep research, she investigates the legendary Los Angeles Public Library fire to showcase the larger, crucial role that libraries play in our lives, and reveals how these buildings provide much more than just books and are needed now more than ever.

“A sheer delight. . . . Orlean has created a book as rich in insight and as varied as the treasures contained on the shelves in any local library.”
—Chris Woodyard, USA Today

“Exquisitely written, consistently entertaining . . . A loving tribute not just to a place or an institution but to an idea . . . What makes The Library Book so enjoyable is the sense of discovery that propels it, the buoyancy when Orlean is surprised or moved by what she finds. . . . Her depiction of the Central Library fire on April 29, 1986, is so rich with specifics that it’s like a blast of heat erupting from the page. . . . The Library Book is about the fire and the mystery of how it started—but in some ways that’s the least of it. It’s also a history of libraries, and of a particular library, as well as the personal story of Orlean and her mother, who was losing her memory to dementia while Orlean was retrieving her own memories by writing this book.”
—Jennifer Szalai, The New York Times

“A lovely book . . . Susan Orlean has once again found rich material where no one else has bothered to look for it. . . . Once again, she’s demonstrated that the feelings of a writer, if that writer is sufficiently talented and her feelings sufficiently strong, can supply her own drama. You really never know how seriously interesting a subject might be until such a person takes a serious interest in it.”
—Michael Lewis, New York Times Book Review, Cover Review

“A book lover’s dream . . . This is an ambitiously researched, elegantly written book that serves as a portal into a place of history, drama, culture, and stories.”
—Jeffrey Ann Goudie, Minneapolis Star Tribune

“Like an amble through the rooms and the stacks of a library, where something unexpected and interesting can be discovered on any page.”
—Scott Simon, NPR’s Weekend Edition

“After reading Susan Orlean’s The Library Book, I’m quite sure I’ll never look at libraries, or librarians, the same way again. This is classic Orlean—an exploration of a devastating fire becomes a journey through a world of infinite richness, populated with unexpected characters doing unexpected things, with unexpected passion.”
—Erik Larson, author of The Devil in the White City, In the Garden of Beasts, and Dead Wake

Reserve or Borrow a Copy of the Book

Click the links below to reserve the format of your choice. For physical items, once you have been notified that your copy is available, you may arrange a Grab & Go pickup from the library or visit during the library's open hours to check out your copy. For digital items, you may be able to borrow them immediately or place a hold on a digital copy, which you may then borrow when available.

We'll be scheduling book discussions led by staff members. In the meantime, here are some questions to think about as you read the book. More information will be coming.

Whether you're a regular podcast listener or new to the genre, we hope you'll enjoy the first six episodes of MHL's new podcast, Shelf Help, in which library staff discuss the book chapter by chapter. Whether you're reading along with us, have already read the book, or want to get an idea of what it's about, feel free to listen. You can find episodes and more info here.

Back to top
randomness